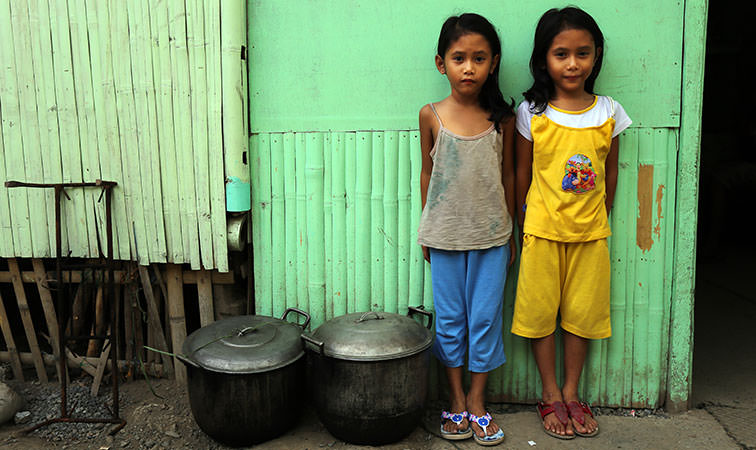 Born within minutes of each other, twins Bealyn and Lealyn entered this world at the worst possible time. The girls arrived in July 2008, two weeks after a strong typhoon hit the Philippines. Their mother Liezel delivered her daughters at home, with the help of a local midwife. “Our home was still in shambles from the flood, we didn’t have walls, so my husband put up temporary blankets to cover me,” Liezel recalls.

Born in extreme humidity, with unsterilised equipment and little infrastructure, Liezel’s labour wasn’t easy. Her daughter Lealyn was in breech position making delivery even harder. Thanks to the intervention of the midwife, Lealyn was delivered safely but it was a few tense moments before she took her first breath. “I felt I should have taken my twins to the hospital after that, but we didn’t have money. We simply hoped for the best for Lealyn,” Liezel explains. “It took us a month before being able to take the twins to the local health centre. Thank God our babies were okay.”

Three years later, it was Bealyn’s turn to give the family a scare. They found a lump found growing underneath her left armpit. She grew restless because it hurt whenever she put her arm down. The nearest hospital that could handle such a case was in Iloilo, 95 miles away. Again the family faced the difficult situation of not having the money to cover travel, consultations and medicine.

By this time, Bealyn and Lealyn were registered at a church-based Compassion project. Liezel didn’t have to worry about covering the medical expenses because Compassion was able to step in. The family travelled to IIoilo where Bealyn underwent minor surgery from which she made a full recovery.

Today the twins are happy, bubbly children who are never absent from the project. Before their twins were registered, Liexel and her husband considered themselves Christians, but hadn’t fully understood what it was to accept Christ into their lives. Through the friendship they received from the staff at the project, they both made a profession of faith and the family now regularly attend the church connected to the project.

Heavenly father, we thank you for the miracle of Bealyn and Lealyn. Today we pray for expectant mothers around the world who will give birth in difficult surroundings. Amen.

Where are they now?