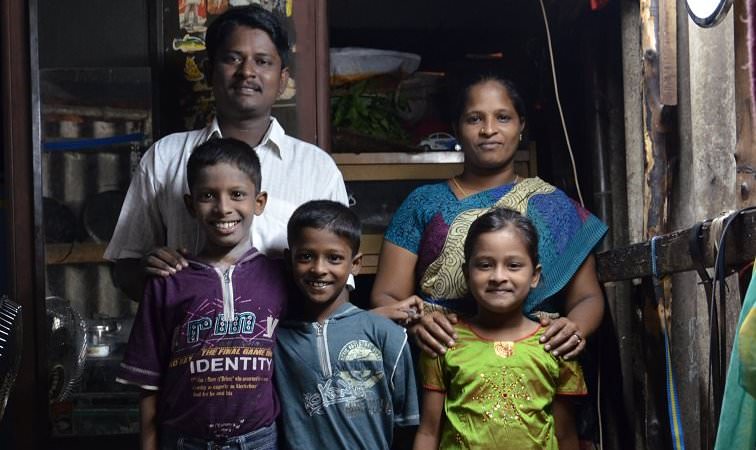 A father turns back on addiction

"But because of his great love for us, God, who is rich in mercy, made us alive with Christ even when we were dead in transgressions - it is by grace you have been saved."

As a heavy alcoholic, Arockiya would remain drunk for most of the day. What money the family had was spent on alcohol, often meaning the children would starve. Try as he might he couldn’t stop his addiction.

One day Arockiya found blood oozing out of his ear, “I was scared to the bones. I told my friends about this. They suggested that I stop drinking, as this occurred due to excessive drinking. I decided to stop this habit. So, I went to the government hospital, where they provided medicine to stop the habit,” says Arockiya.

Though Arockiya renewed his determination to stop drinking, he could not control his addiction.

Arockiya’s children attend a local Compassion project and told him about a de-addiction programme run for adults in the community. At first he was sceptical, but there was something within him driving him to change. He enrolled in the seven day programme.

God took him on a journey through the programme, “I felt the love of God and, each day, we were reminded of honesty, open-mindedness and commitment. We were taught the negative impact of drunkenness and how we neglected everyone in the family. As I kept hearing the word of God, from my life began to see a great transformation within me. I started to pray earnestly and sought God’s mercy. In my life, I offered my prayers to many gods, but I received help from none. Now, I understood that it was not the medicine alone that helped me, but the faith in God,” he says.

Changes are evident in Arockiya. His home is filled with love and he works hard and supports his family.

Heavenly father, we thank you for your mercies that are new every day. We thank you that despite our transgression, you are rich in mercy and demonstrate unconditional love. Help us to show others mercy and acceptance. Amen.

Our work in India

Compassion will formally end all programme operations in India on March 15, 2017.

With our hearts aching, Compassion has begun the process of ending our operations in India.

Pray for Edna whose mother is an alcoholic and has been struggling to care for her children.