Home >About Us >Ambassadors >Written in Kings 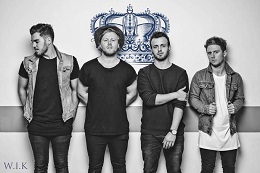 Written In Kings are a rock band from South Wales. With influences stemming from Royal Blood to Needtobreathe, the lads are inspired by honest and passionate rock’n’roll. The band have just released their much anticipated single, Prodigal and will be releasing a new EP in Spring ’16 that will showcase WIK’s exhilarating new music. In conjunction to the release of their new music, WIK are currently playing shows throughout Europe from Arenas and Club Shows to intimate Coffee Shop sets, so, be sure to catch them on the road!

Written In Kings established themselves 5 years ago through two friends’ passion and vision for music. Today, the band consists of front man, Sam Taylor and his brother and lead guitarist, Ben Taylor, with Nathan Beaton (drums) and Josh Halls (Bass). The band has been on an emphatic journey to put God at the centre of all that they do as a band and because of this, their experience of the music industry has been vast with career highlights including shows at the Millennium Stadium and the Ricoh Arena, playlisted on UCB and selected as BBC Wales’ artist of the week.