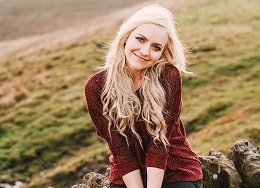 Since the independent release of debut album Watching Me in 2007, Philippa Hanna has grown from her roots in the Gospel scene to be one of the UK’s most engaging and inspiring songwriters. Over four albums her music has offered a positive message that has touched the hearts of audiences the world over. As well as taking in hundreds of solo tour dates, Philippa has toured alongside Lionel Richie, Wet Wet Wet, Rebecca Fergusson and Collabro. She has appeared on BBC Radio 2, the BBC's Songs of Praise, and has published two books, More (2008) and Following the Breadcrumbs (2013), tracing the "everyday miracles" of her Christian faith. She recently undertook two trips to Nashville to promote her music in the USA, funded with a grant from the Music Export Growth Scheme.