The First in My Family

Ending poverty can seem like an insurmountable challenge. But showing God’s love to just one child can ripple out, impacting a family, a community, and ultimately a nation. Not just now, but into eternity.

The First in My Family

Ending poverty can seem like an insurmountable challenge. But showing God’s love to just one child can ripple out, impacting a family, a community, and ultimately a nation. Not just now, but into eternity.

Home >Pray & Connect >Blog >The First in My Family

Meet six Compassion-supported young people who are on their way to a better future, achieving the seemingly impossible. They’re the first in their family to become computer literate, earn a degree, have a formal job, a working toilet in their home, and know the saving grace of Christ Jesus.

In practice, not just theory 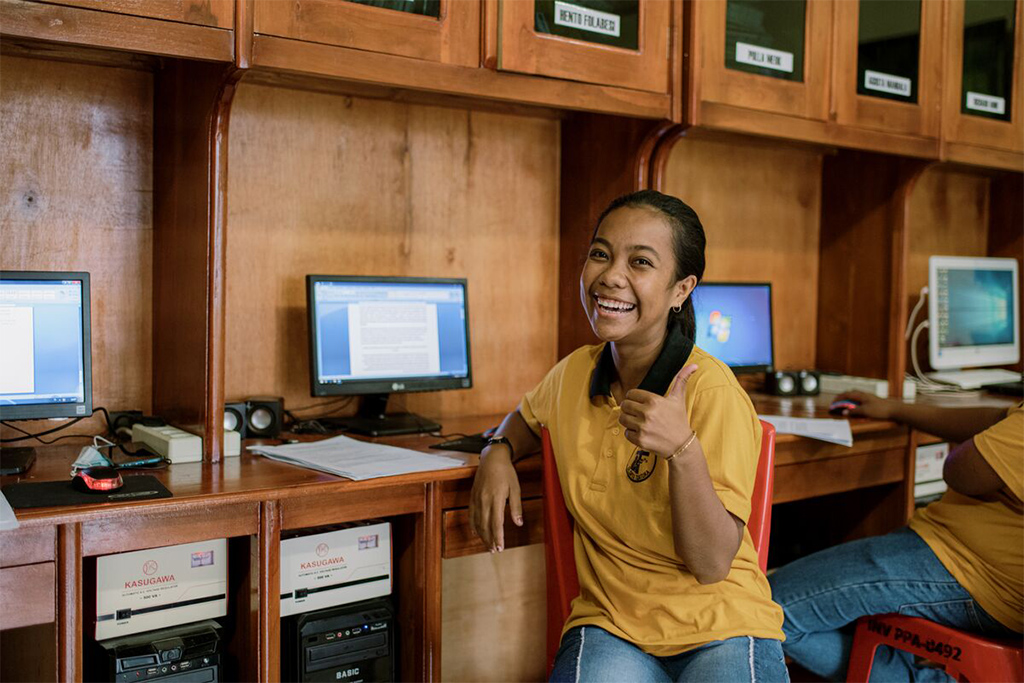 In a small village in Kupang, Indonesia, a computer lab is silent apart from the rhythmic sound of fingers hitting the keyboard. 17-year-old Inggrid is deep in concentration. After so long of only learning the theory side, she’s making the most of using a real computer.

"At school, there is so little I can learn about computers but at the [Compassion] project, I can learn the theory and the hands-on practise using a computer," Inggrid explains.

Thanks to an intervention which saw a computer lab installed at the local church, Inggrid is the first in her family to be computer literate.

This has opened a future of possibilities for this young teen.

Inggrid dreams of becoming a preacher one day and hopes to make her parents proud. She believes her computer skills will help her navigate through her further studies. She's already encouraging and counselling her friends. "Don't let the obstacles to studying hold your spirit," she tells them. "Keep pushing through because your hard work won't let you down." 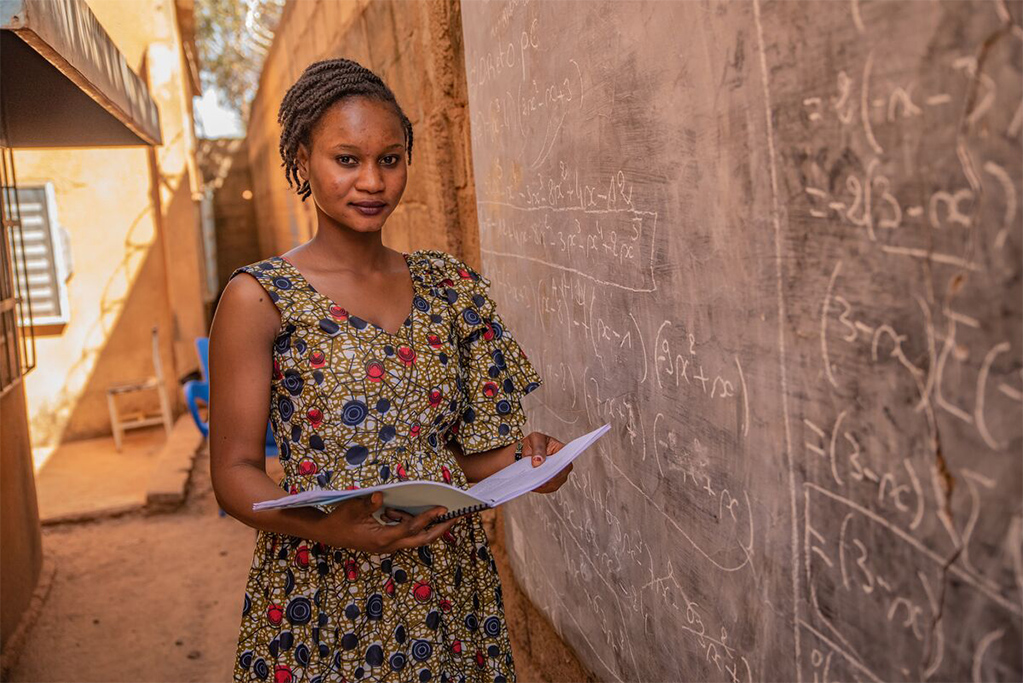 Fatoumata says, "I am blessed to be the very first in my family to attend university and I trust that my five younger siblings will follow my steps.”

In the heart of Burkina Faso, there’s a young woman defying all odds. Her name is Fatoumata, and she’s about to become the first in her family to earn a university degree.

Growing up, Fatoumata watched many of her friends drop out of school to marry or take up informal work.

“My parents didn’t get the privilege to be enrolled in school, says Fatoumata. "I would have dropped out of school before reaching university for poor performance because I used to be sick in my childhood. Like some of my friends from primary school, I would have been married as a young girl.”

In 2005, Fatoumata was registered into the Compassion Sponsorship Programme, run at her local church. Thanks to sponsorship, Fatoumata immediately began receiving education support.

“I [was] granted top-up school fees, books, tutoring, and counselling from the project staff," she says. The [Compassion] project has done so much for me and I am full of gratitude."

Today, the 21-year-old is a second-year communications student and the first in her family to attend university. She’s passionate about seeing other young women rise above their circumstances to become all that they can be.

“My call to all low-income families is to never give up on the education of their children, especially girls. Education is a key for children to develop their God-given skills and become the blessings of their family," says Fatoumata passionately. 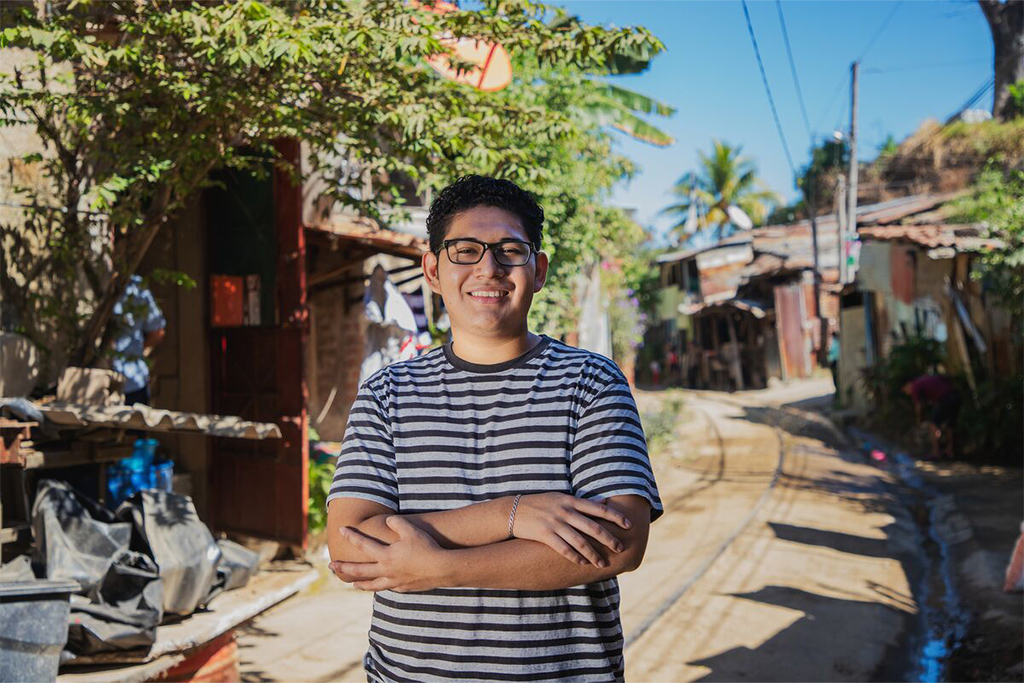 "Now I live in economic freedom. I dream that someday all my family can find spiritual freedom, too,” says Kevin.

Twenty-two-year-old Kevin lives in one of El Salvador’s most dangerous communities. Growing up, Kevin saw two options in front of him. Find an informal job or join one of the local gangs. The idea of going to university seemed an impossible dream. Simply surviving was hard enough.

“From my father’s total salary, we only get $5 USD every month because all the income goes towards paying a debt,” explains Kevin.

Since the age of six, Kevin has been part of Compassion's Child Sponsorship Programme. It’s here, at his local church he discovered the opportunities beyond those he saw all around him.

"I attended my [Compassion] project every day, even when I didn't have classes. There I found a home because my parents were working all day out of the house," says Kevin.

It was here that he was inspired to follow a different path.

“When I was a child, the [Compassion] project made an activity where all the staff dressed up as different professions. Since that day, I began to dream of being a professional in the future.”

Kevin realised what was possible and thanks to the support of the local church and his sponsor, he began studying for an IT Associate degree at university on a full scholarship.

The journey wasn’t easy. "I remembered some people judging me because of my modest way of dressing. In the neighbourhood, someone said hurtful comments about my career because they didn't believe that you could stay in front of a computer working, without wasting your time," says Kevin.

Kevin persevered and continued to study hard. He graduated with his degree and began working at a private company specialising in software development for technological business solutions.

With his income, Kevin happily and proudly helps to support his family, chipping away at the debt that has burdened them for years. 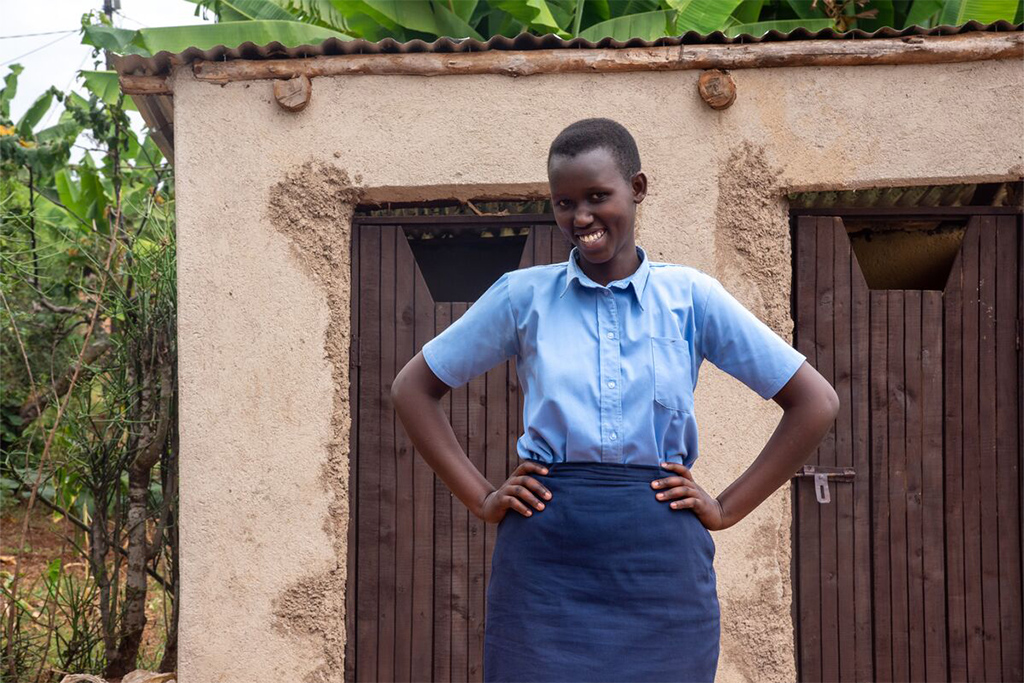 “I’m grateful to my sponsor and Compassion for always restoring our dignity as a family,” says Gloria.

Imagine not having a toilet or shower in your home.

Halfway around the world, in Bugesera, Rwanda, most homes don’t have bathrooms or private showers. Many women and girls wait for the sun to go down before they shower or rise before dawn to wash.

A 2019 survey of Compassion registered children and their families in the district indicated that out of 2,951 households, 562 (19%) had toilets in terrible condition, and 141 (4.7%) didn’t have a toilet at all. Children and their families used the nearby bush or shared bathrooms with neighbours. It’s not only the lack of privacy, but the loss of dignity and the child protection rights that are at stake.

“Lack of access to improved water and sanitation facilities and poor hygiene contribute to the high incidence of water, sanitation, and hygiene-related mortality and morbidity,” says Damien, the Director of the local Compassion project.

After the survey, a decision was made to establish an intervention to provide clean pit toilets, washrooms, and handwashing tools for the 440 most vulnerable households.

Thanks to donations from around the world, Compassion sponsored children like Gloria were able to wash in safety and peace for the first time.“Our toilet was in a very poor condition, and we usually visited neighbours to use their toilet,” says Gloria. “But that’s not the case today— I can attend school and access healthcare thanks to the support I receive from my sponsor, the centre staff, and Compassion.”

More than 4,000 people are now benefiting from this intervention.

“Our children’s lives are protected when they have a clean water source, good and safe toilets, and bathrooms,” says Damien. “When children have a conducive environment, they grow up healthy and have bright futures.” 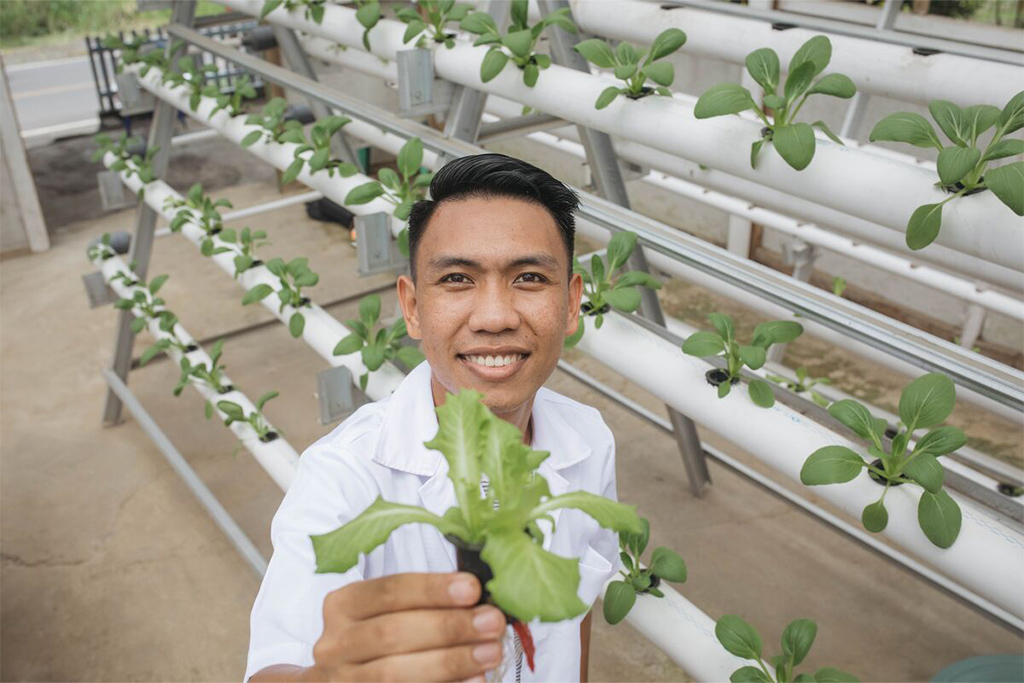 "It’s a great thing that Compassion has helped me from the age of eight until today. I’m sure I would never be like who I am now without all the support I have received,” says Fizky.

In North Sulawesi, Indonesia, there’s a hydroponic vegetable garden that’s growing hope for children living in extreme poverty. It’s the brainchild of a 21-year-old agricultural student, Frizky. A Compassion-supported child, he is the first in his family to go to university.

The extraordinary young man lives with his grandparents, Julien and Hans. The family is abundant in love, but finances are much harder to come by. “My grandfather works as a daily labourer with uncertain wages, limiting my family’s economic situation,” explains Frizky.

With his grandparents struggling to afford an education or nutritious food for him, Frizky was registered in the Child Sponsorship Programme when he was eight years old. The project quickly became his favourite place where he met with friends, shared with his tutors, prayed, and learned.

He’s been a part of a unique youth programme since he was 16 and it was there he suggested they create a hydroponic garden.

His proposal was taken seriously. To Frizky’s delight, the funds were approved, and land at the Compassion project was set aside to build the greenhouse. Under his instruction, Frizky’s friends at the project started work on the hydroponic garden, perforating 300 holes in PVC pipes to plant bok choi and lettuce.

Frizky and his friends harvested their crop for the first time in 2020. They sold it to the local community, earning 1.2 million rupiahs (£64).

After the first harvest, the team added an extra 700 holes for additional seedings. Three months later, their harvest was ready. This time they sold the vegetables to two big supermarkets in Manado city.

In August last year, after the fourth harvest, Frizky graduated from university with distinction and earned his bachelor’s degree. But Frizky’s success is not only for himself. He has trained two successors who will replace him in managing the hydroponic garden when he graduates from the Compassion project. 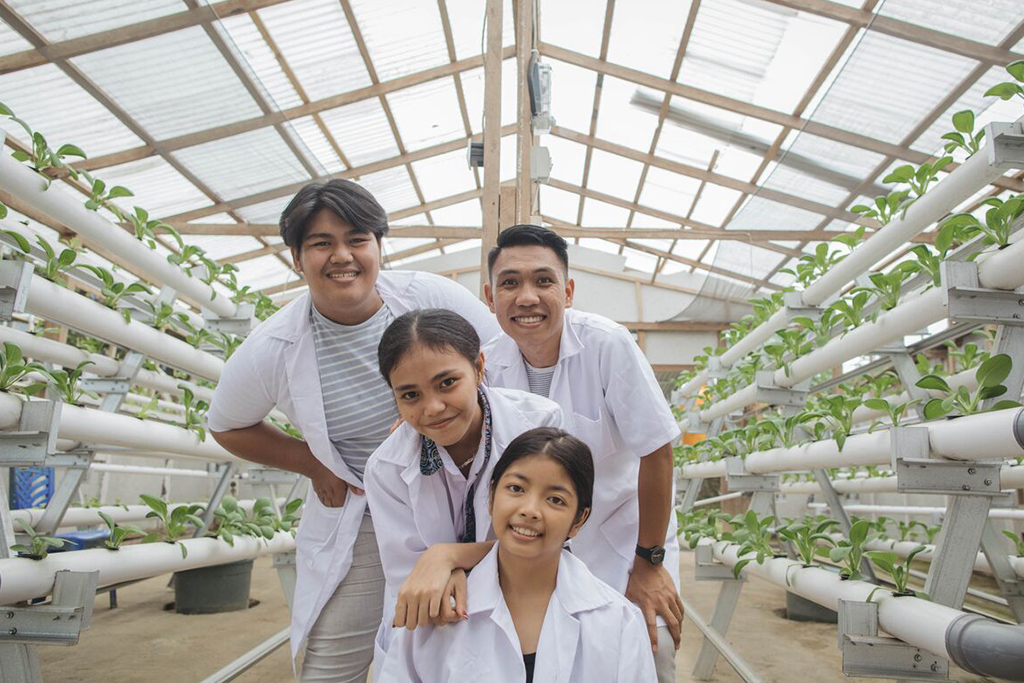 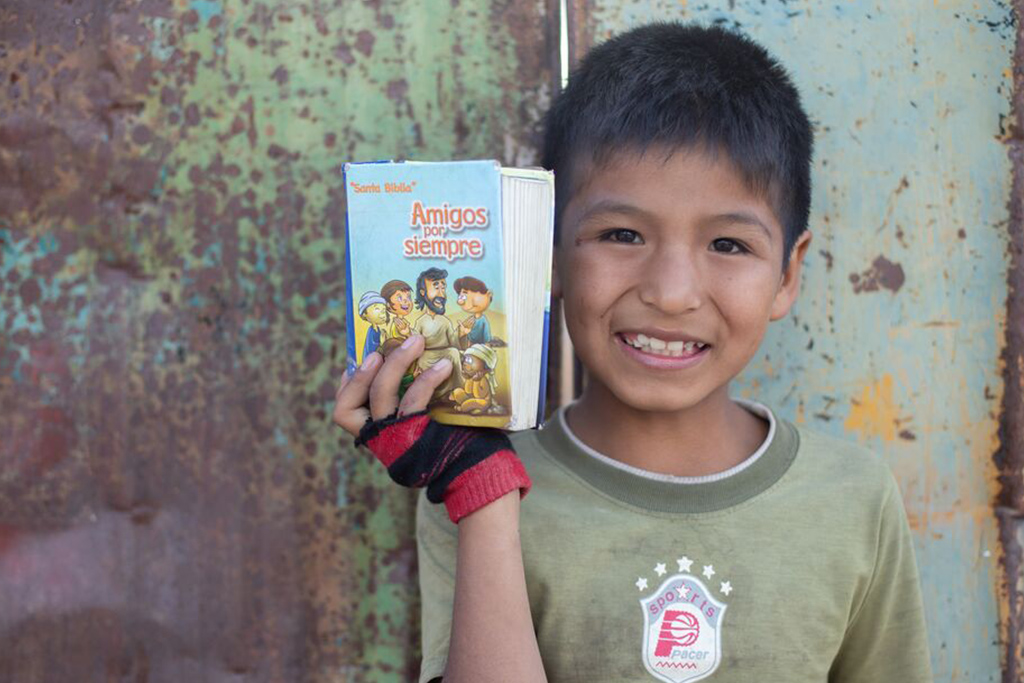 Elvis says, “I read my Bible at home and pray at night. I pray for my Compassion sponsor and my dad.”

High in the mountains of Bolivia, one persistent boy is transforming the lives of people around him through his faith. His name is Elvis. He’s the first in his family to follow Jesus.

It was Bible distribution day at Elvis’ church-based Compassion centre in Cochabamba. Elvis was seven years old at the time. The older children were each going to receive an age-appropriate copy of God’s word in their language.

The problem for Elvis was that he wasn’t in the age group scheduled to receive Bibles that day.

When Ruben, a project staff member, explained he would receive a Bible at another time, the young Elvis began to cry.

“He was desperate to have a Bible,” Ruben recalls. “So, I gave him one.”

Elvis says, “I received my Bible on August 20, 2017. I wanted it so that I could learn more about God.” He read it constantly. Eager to learn everything he could about its teachings, he never missed Sunday school.

During the intercessory prayer time at church, Elvis always asked for the same thing — that his father, Sergio, would accept Jesus as his Saviour. Sadly, Sergio, an alcoholic, had been injured in a car accident. The paralysis he suffered meant that he would never walk again.

Honouring Elvis’ persistent prayers for his father, God touched Sergio’s heart, and he accepted Christ into his life.

Today, Elvis enjoys reading the Bible to his dad.

We often think changing the world needs a grand gesture or an expensive intervention. But it’s the small everyday decisions we make to serve God and each other that can have an impact that ripples across generations, changing not only the future of individuals but also communities.

Think extreme poverty is a problem too huge to solve? With faithful support and prayer, we can all help change the life of at least one child to break free from the limitations of poverty.

And who knows what that can lead to – a garden that’s feeding a community, dignity restored by new bathrooms, or a family who’ll be singing Jesus’ praises for eternity.

The possibilities are endless.