Getting her life on track

How a surprise pregnancy turned a teenager’s life around

Getting her life on track

How a surprise pregnancy turned a teenager’s life around

Home >Pray & Connect >Blog >Getting her life on track

Graseldy was only 14 when she realised she might be pregnant. At first, she did what she could to conceal her growing belly from her family, friends and school teachers.

She remembers feeling the baby kick for the first time – she was suffering with a fever and her mother had asked a local woman to give her a traditional massage. Graseldy says, “Most village masseuses know when a woman is pregnant; as a trick, I covered my stomach with a blanket while I got the massage. Suddenly it felt like something punched my stomach from inside. My heart beat so fast and I felt nervous.

At that moment, I knew that I was pregnant, but I wasn’t ready to confess it.”

About five months into the pregnancy, one of Graseldy’s teachers caller her aside. After some gentle questions, she encouraged the teenager to take a test and accept that she was pregnant. The teacher accompanied the young student home so she had support when she told her mother about the pregnancy. Although upset and sad, the mother assured her daughter she would look after her.

Graseldy wasn’t ready to have a baby, and getting pregnant while in school was a big challenge. But three months before her daughter, Eklesia, arrived, Graseldy’s mother encouraged her to register in Compassion’s Child Survival Programme (CSP). She enrolled in July 2014, becoming one of the youngest beneficiaries in East Indonesia.

MADE UP WITH MAKEUP

As a young woman, Graseldy has always been interested in makeup, and she was thrilled to find that the project offers classes to equip mothers with knowledge and life skills such as sewing, baking, styling hair and applying makeup. 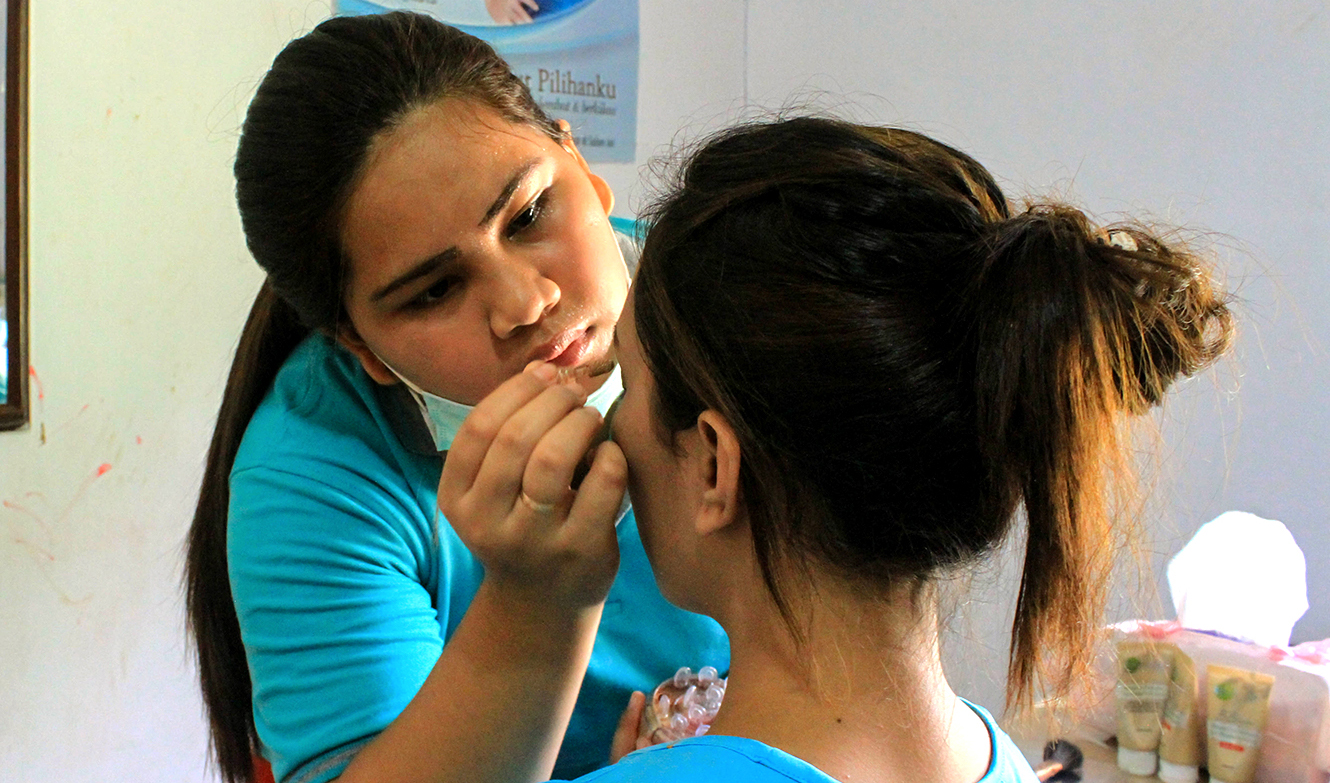 “I chose the class because I really enjoy doing makeup on myself and others,” says Graseldy. Within a year, she had passed the class and started her own business.
The new mum initially provided free services to her friends, and the news of her business quickly spread. Soon, she started to get calls for makeup, facials and hair styling. “I’m really happy that I’m able to get money and I can use it to buy food for my family,” Graseldy explains.

But she didn’t just learn about makeup. She also learned about responsible parenting and took part in regular Bible studies. “I praise God for my family and their support,” Graseldy enthuses.

“I’m also proud of myself. Everyone makes mistakes. I made one and I know it was wrong, but I got up again to continue my life for the sake of my family.”

The teenager has also been an inspiration to others in the programme, according to the project implementer, Selfia, who says, “Graseldy’s experience shows that anyone can be better if they want to move on and have positive perspectives about their lives. She is a strong young woman and smart.”

Supported by the baby’s father, Graseldy is back in school and preparing for final exams this April, with the hope of going to university. She dreams of studying law and becoming a teacher when she finishes school. She says, “In the project I learned always to be positive and to move on. It gave me skills, but more than that, it has been a way to get my life back.”

Through the Child Survival Programme, Compassion is reaching vulnerable children before they are even born by providing antenatal care for expectant mothers.