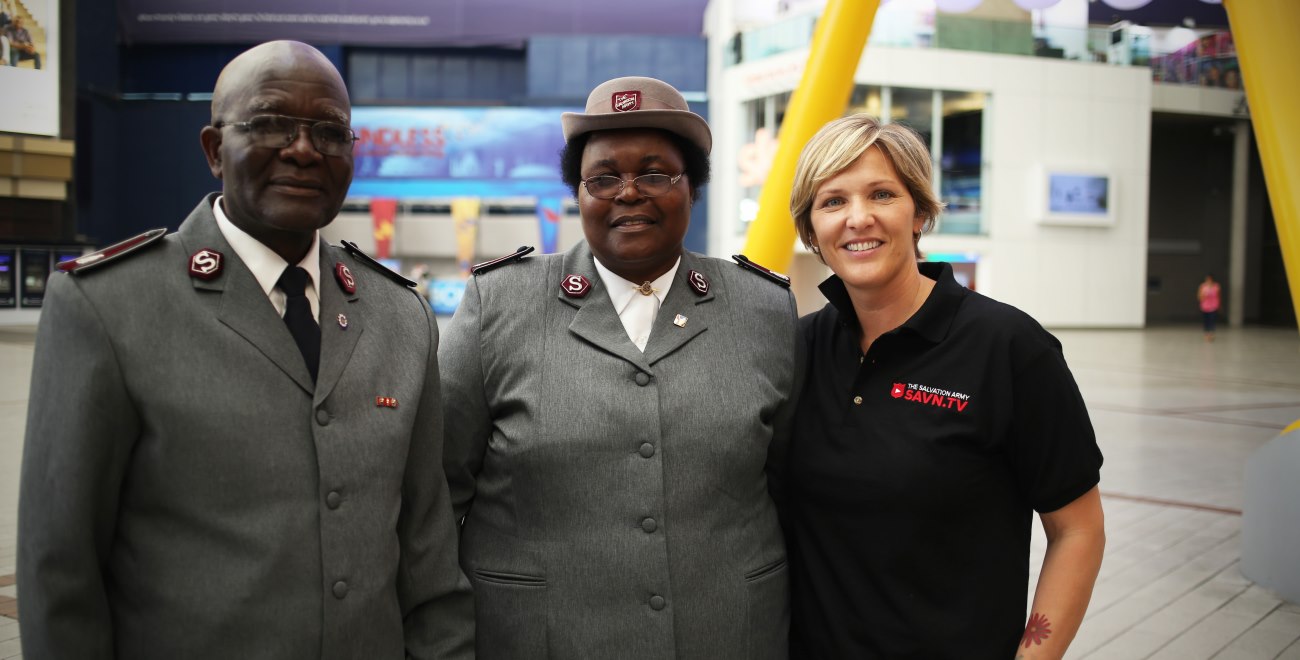 An Interview with Danielle Strickland

Danielle is a minister and officer with the Salvation Army.

An Interview with Danielle Strickland

Danielle is a minister and officer with the Salvation Army.

Home >An Interview with Danielle Strickland

Danielle Strickland is a minister and officer with the Salvation Army. She recently relocated to Los Angeles to be Social Justice Secretary for the Salvation Army in the Western United States. We caught up with her to talk about her passionate hope for salvation, putting an end to Human Trafficking and witnessing the elimination of extreme poverty in her lifetime.

Can you describe the connection between your relationship with Jesus and your heart for social justice?

I just follow Jesus and this is where the road goes. Social justice isn’t something I added to my discipleship, it’s just where discipleship led me. As you get to know the calling of Jesus, He invites you into the margins and into this incredible plan He has to redeem all things in all ways. We believe that salvation isn’t just something happens to your soul, it happens to your whole body, spirit and soul.

William Booth [founder of The Salvation Army] used to say, two things are necessary to mark salvation. The character of a person has to change – this is in an inside work that only God can do and the other one is that the circumstances of someone’s life will change and that’s an outside work that he partners with the people of God to do. I believe those two things are still necessary.

You've experienced need in all sorts of contexts across the world. What has been your experience of dealing with that need and not being overwhelmed by it?

I was discipled in Malawi on a mission trip, when I was still a juvenile delinquent. I actually had to get permission from my probation officer to go. I went to help build an orphanage with a team of young people and we arrived in the middle of a famine. We watched a lot of children die from hunger. It overwhelmed me but it also rescued me. Poverty jars me out of a selfish bubble that I’ve grown up in and lived in. It alleviates my selfish view of the world, which is that somehow the world revolves around me. That experience invited me into agony but also the opportunity to help change the world. I realised that my life can actually mean something other than my own satisfaction. It rescued me in many ways. I always say that Jesus saved me but Malawi rescued me from a self-focussed faith.

In the West we are in danger of a self-focussed salvation so really my job is to be a bridge. I invite people to come out of comfortable, wealthy backgrounds and encourage them to meet people even in Western contexts, which are supposed to jar them. People say, “I’m overwhelmed.” and I say “That’s the right response. I’m overwhelmed, you’re overwhelmed, Jesus is overwhelmed. Actually he wept quite openly about it.” And then the question becomes,“Now what? Could we participate? What can we do?”

Sometimes even though cultures and contexts can be so different the spiritual need of human hearts are not so different. Do you see need in the West being different to the need in developing countries?

Poverty is disempowerment. I went on a fast when I was young to experience hunger. I was about four or five days into the fast and I was really hungry and the Lord spoke to me. He told me that I would never really experience hunger and that fasting is not the same as hunger. True hunger is when you want to eat and you can’t eat. Poverty revolves around a lack of choice.

There are aren’t many differences between a rich woman in a wealthy country who’s being abused by her husband and a woman who’s in a developing country who’s also being abused. They are both stuck in painful situations. The similarities of disempowerment are the same; they just come in different forms.

A lot of my work is to do with women who’ve been sexually exploited or prostituted or forced into the sex industry. I was on a retreat with women who’d been prostituted on the streets of one of Canada’s wealthiest cities. Three out of six of the women of the small group that I was leading told me the stories of how their fathers sold them into sexual slavery when they were about six or seven years old. I thought that was something that happened in Cambodia or Thailand. Their dads were drug addicts and they needed drugs so they sold their daughter and on and on it goes in a Canadian context. So much of our society suffers from a poverty that I didn’t even know existed.

Again and again I’m reminded that the human condition is the same. We make mistakes when we think we don’t have similar issues of the heart. But God can bring true empowerment to people, anywhere and anytime and it needs to happen everywhere.

If you were speaking to Christians who were apathetic about social justice what would you say to them?

You need to care for the needy. The Bible commands you to do it. Jesus invites you to it. One of the greatest dangers to Christianity in this generation is thinking that caring for the needy is some super spiritual experience. An enemy of the Christian faith from the beginning was Gnosticism, it was this idea that spirituality is separate from the way we lived our lives, or how we treated our bodies, spent our spare time or used our money.

Salvation means the whole of yourself being completely dedicated to the purposes of God. To lose your life to gain the kingdom of God is well worth it. To hold your life and to not participate in this plan is to actually lose it. Jesus invites you to this radical way of life that changes the way that you live and think, to pass Jesus up on that invitation is a sorry place to be. Don’t be afraid. God has a plan to use your gifts and skills for His Kingdom.

Tell us about the child you sponsor with Compassion

He’s called Emerson Noel and lives in Haiti. He’s partnered with my five-year-old son, Judah. His photo lives on our fridge, we pray for him when we eat and Judah really loves to talk about Emerson and wants to go and visit him. He’s a little boy with hopes and dreams for the future and I’d love to see him accomplish those things.

We are in danger of thinking that poverty is some issue that faces us and we forget that actually poverty is just people suffering conditions in certain places. Jesus modelled one-to-one ministry to us really well. Academics and Development experts might say, “Can one person really make a difference?” But Jesus demonstrated this, he went to the one, he stopped for the one, touched the one, healed the one, knew the name for of the one. This exchange of relationship is very powerful. The child sponsorship model is powerful because it’s choosing to see one individual. It’s like saying, Emerson, I see you. No one else does, other people might say you’re one of those kids that doesn’t have enough, but I choose to see you.

Emerson offers me a way out of that wave of impossibility and this big thing called poverty. Child sponsorship is a powerful, gospel-centred model. Of course there’s a place for development and challenging big systemic issues, but this one-on-one model can change the world.